I heard there was a Secret Chord – What did David play?

I heard there was a secret chord – what did David play exactly? (Music Theory Tips & Tricks)

In today’s music theory tips and tricks, we are going to be looking at the popular song “Hallelujah” by Leonard Cohen and the mysterious chord he mentions in the lyrics “I heard there was a secret chord, that David played it and it pleased the Lord.”

Now what is this group of musical notes that ‘pleased the Lord’? Let us take a look at the chords used in the song:

Let’s use the key of C. If we write down the chords in the key of C, here’s what we have –

We’ll give each chord a number, with C being 1 and Am being 6(minor) or 6m. It will look like this:

Here are the lyrics and chords to the first verse of the song:

C Am Now I've heard there was a secret chord C Am That David played, and it pleased the Lord F G C G But you don't really care for music, do you? C F G It goes like this, the fourth, the fifth Am F The minor fall, the major lift G E7 Am The baffled king composing Hallelujah

We can see that the chords follow the rule of 1, 4 & 5 being major chords and 2, 3 and 6 being minor chords. However, there is one little change made in the last line. Instead of playing E minor, he uses E dominant 7 (or E Major with an added dominant seventh note).

All the notes in E minor (E, G and B) can be found in the Key of C. What about E7? There is a dissonant note which is G#. This is the note that adds tension to the chord and thus making it stand out in the entire chord progression. This is the secret chord!

This is a popular songwriting trick to create tension that can be seen in popular music too. Take a look at the song ‘Creep’ by Radiohead. Instead of playing 3m, they play 3M. Try it out by changing any 3m chords in songs to 3M and see how it affects the melody.

Here at Guitar Emerge, we utilize songs in our guitar lessons. If you are interested in playing guitar and having a deeper understanding of the song, consider signing up for a free trial guitar class with us!

Guitar Lessons Singapore - Tips On How To Practice Guitar? 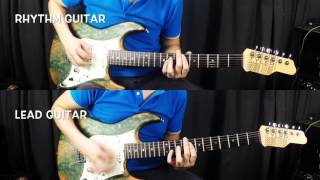 Planetshakers - This Is Our Time (Electric Guitar Cover & Tutorial with tabs) 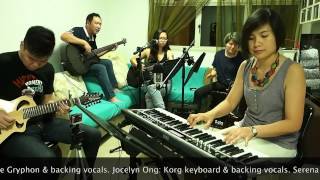 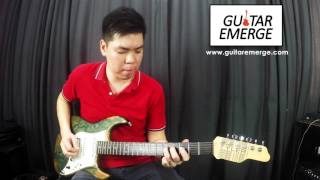 How to overcome stage fright?

What To Look For In A Beginner Guitar? (Beginners’ Guide)